How many developers are there in the world in 2022?

Software is the driving force of the world today – with an estimated 9 trillion devices in active use, it is the glue that connects people from all corners of the globe. Software developers are shaping and building the modern technological world.

Based on these predictions and recent developer growth rates since then, we already know how things look today, in 2022.

A world of developers

According to the 20th edition of the State of the Developer Nation report, there were 26.8 million active software developers in the world at the end of 2021. Experts predict that the number of developers will grow to reach 45 million by 2030. These are very impressive figures that prove that the demand for IT professionals is growing – and will continue to grow – all around the world.

When it comes to demographics, 62% of developers are below 35 years old. There’s also been quite a noticeable (and positive) shift in the number of female developers. Around 20% of all people involved in software development are women. 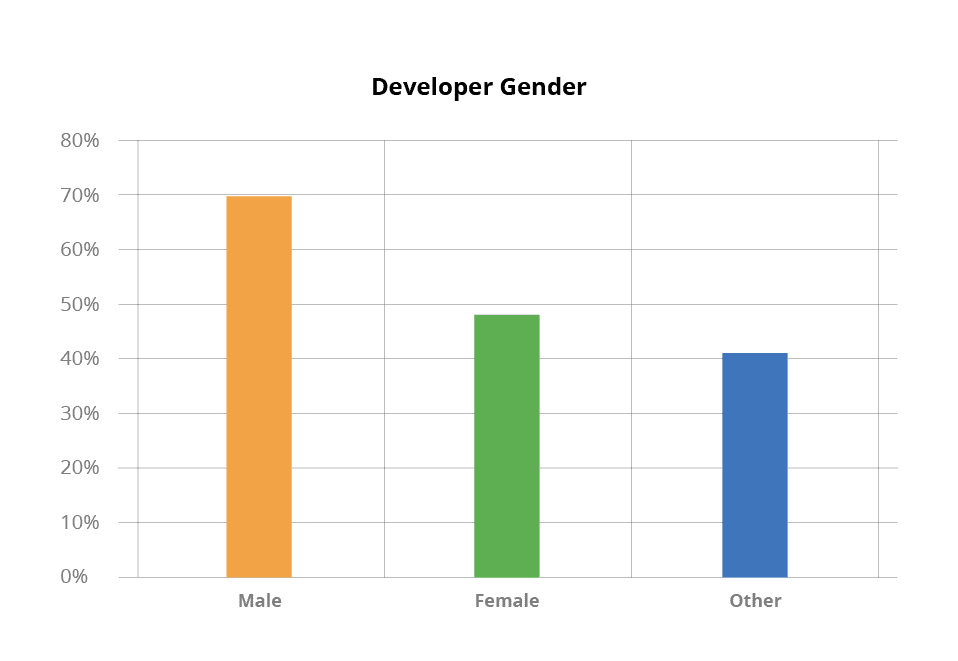 And this seems to be a skyrocketing trend! The number of women in tech is visibly growing, largely due to the increasing availability of various conferences, workshops, summits, university courses, and festivals that have been organised specifically for women. And female developers are generally younger than their male counterparts, so we can expect that this is only the beginning, and that the gender ratio in IT will soon become a lot more balanced.

There are a few programming languages that we should pay attention to: 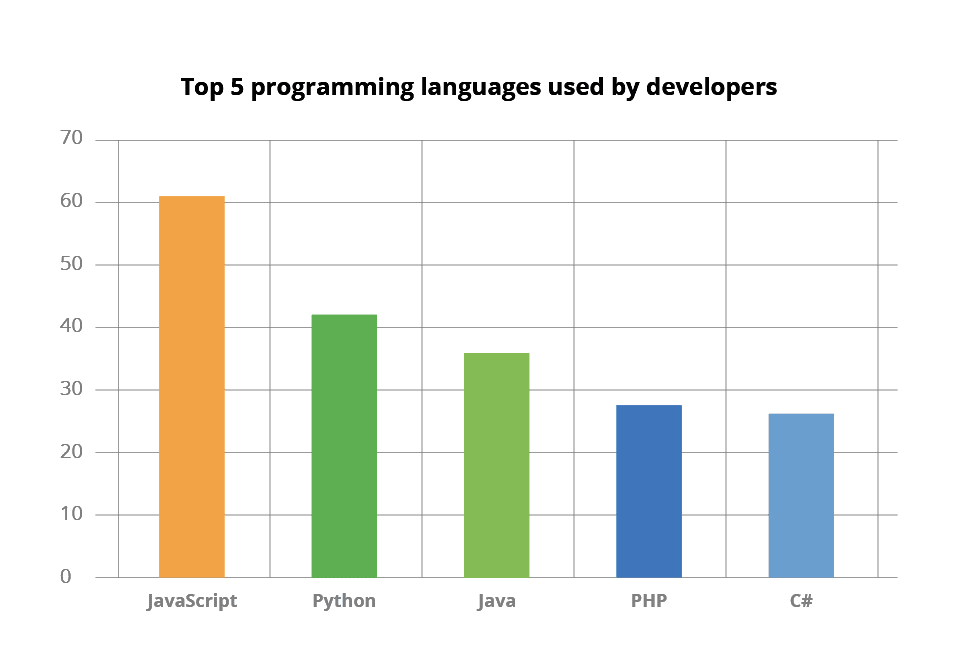 Of course, these languages are not only popular among software developers but also highly sought after by employers:

Just as technologies constantly evolve, so do popular areas of interest within software development. Developers are increasingly becoming more engaged with (% of developers using, learning about, or interested in each technology):

However, despite the increasing academic interest in these fields, the actual adoption rates of these technologies are significantly lower. Only 10-15% of the developers interested in these topics are currently working on related projects.

And when it comes to specific programming languages that developers are willing to learn, Go – a simple and efficient open-source language designed in Google – remains at the helm: 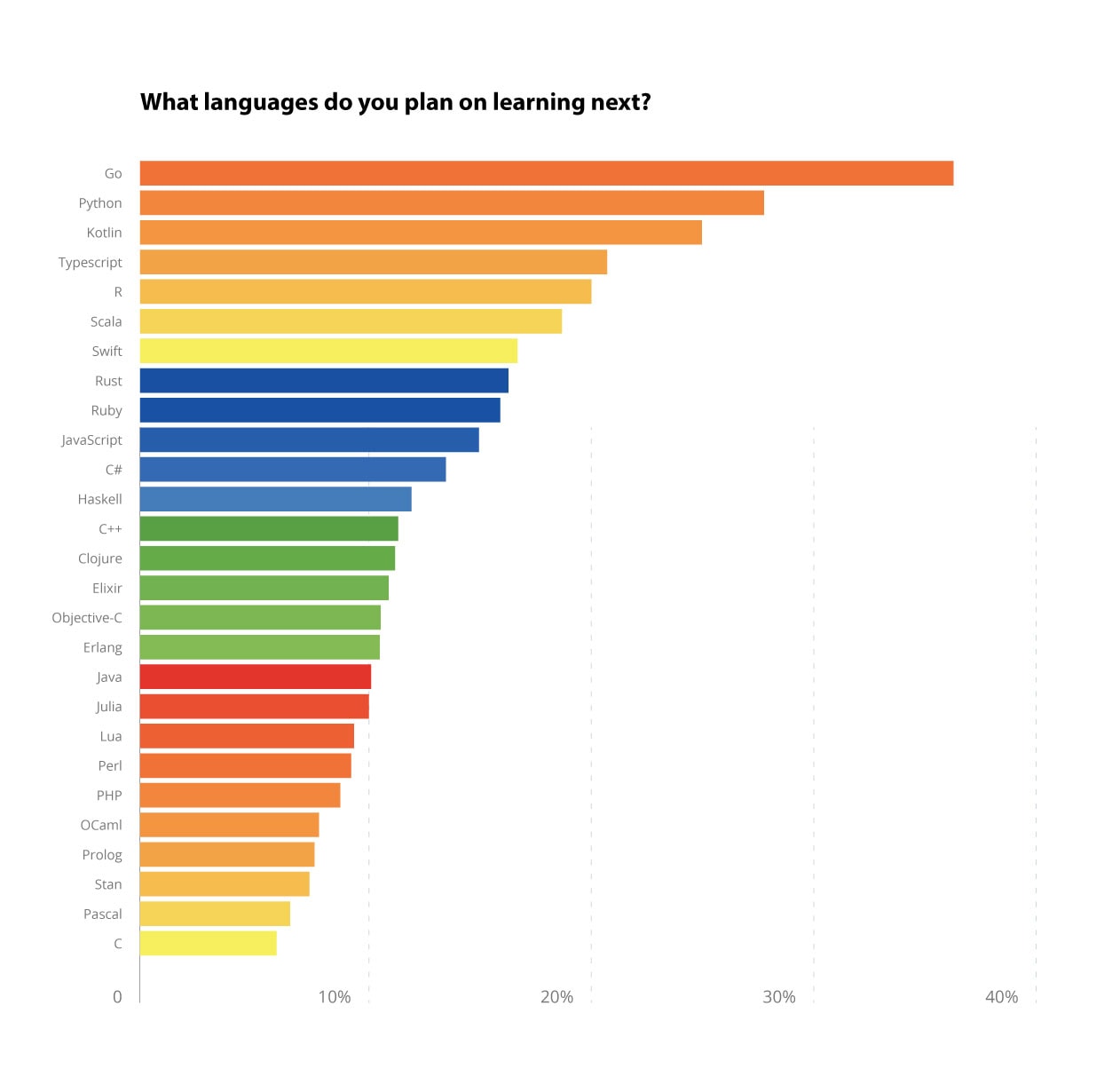 Python and Kotlin follow at a close second and third. This can only mean that interest in big data, machine learning and Android apps will not be slowing down anytime soon.

Education and ways of learning

General tendencies show that the bigger the company, the higher the degree of education it expects from its employees. Smaller companies are less likely to require even a Bachelor’s degree from developers, which creates huge employment opportunities for self-taught experts. 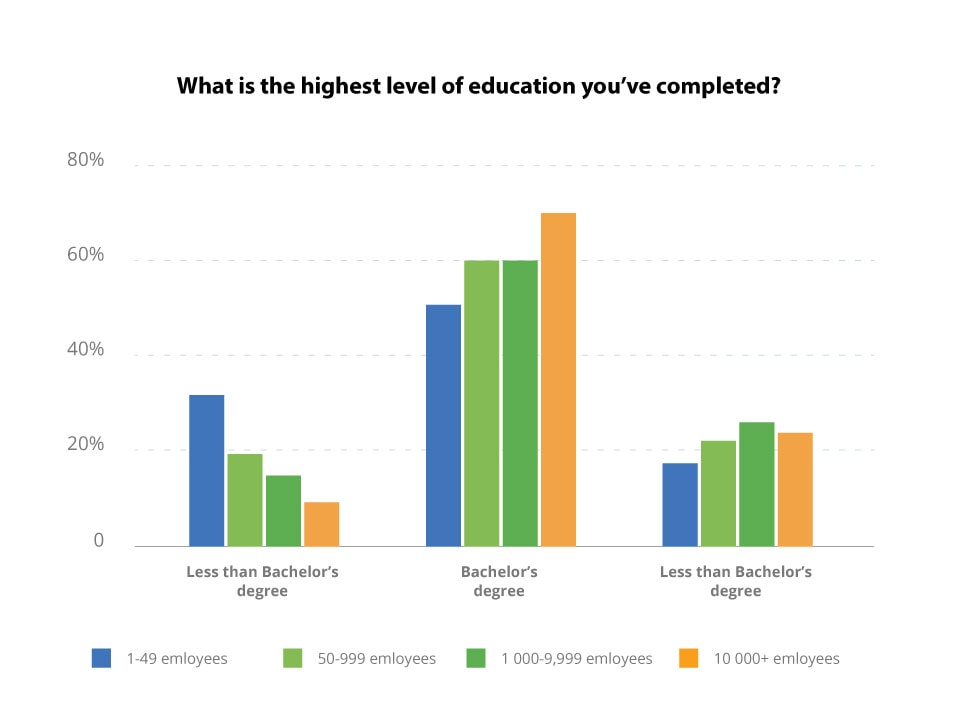 Newer generations of developers are also utilising different sources of knowledge, such as YouTube videos or coding bootcamps, while older generations – with baby boomers leading the way – prefer to learn how to code from books and on-the-job training.

Take a moment to download our tool for comparing and selecting IT outsourcing partners – and make sure you choose the right one!

The supply and demand of software developers

While the current supply of developers seems to be very high, the need for their services shows no signs of slowing down. With thousands of start-ups popping up in various countries each year, the demand for developers is, in fact, soaring. Some reasons as to why this may include:

The influence of the pandemic

The COVID-19 pandemic has affected many industries, creating a strong demand for dedicated solutions and customised systems. Almost a third of all companies – including 80% of IT companies worldwide – have switched to working remotely.

Some early research on this issue by Coderbite, brings attention to the problem of working overtime, as the new solutions are needed right now, no matter how many hours it takes to deliver them. 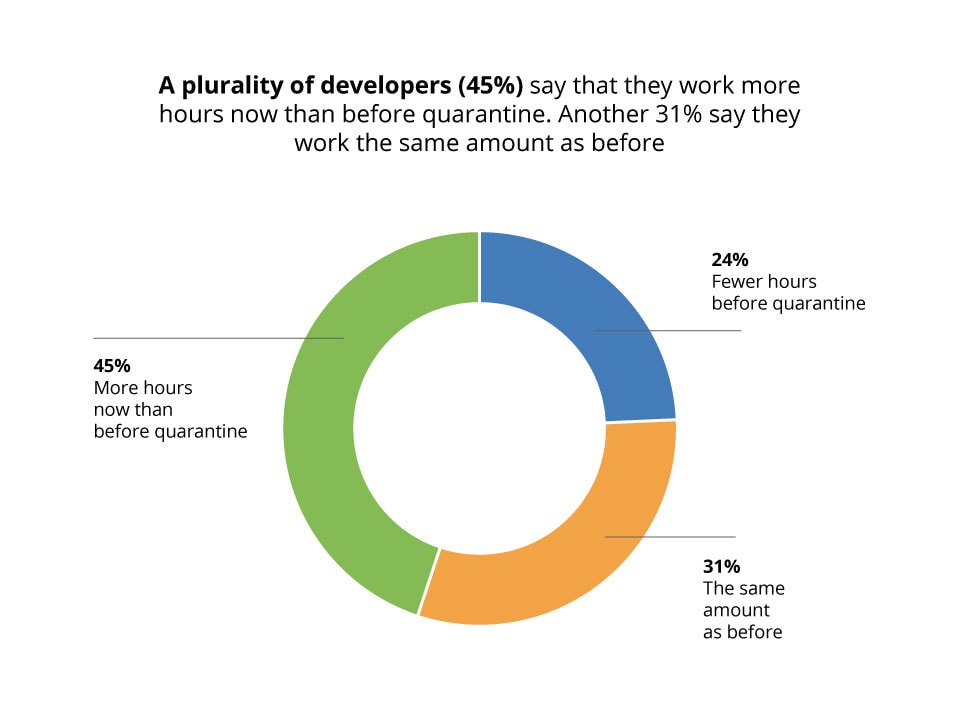 Also, leading a team that works remotely for a long time is a challenge. Especially if it is a new situation for some of the team members. Fortunately, there are a lot of online solutions and tools available to help you keep the work efficiency and team spirit on the highest level, no matter if you are working from the office or from home.

We highly recommend that you familiarise yourself with our tips on managing remote teams successfully. Especially now that we know that we will need to deal with the ups and downs of the pandemic for many years to come. This has had a significant influence on the way that developers work: 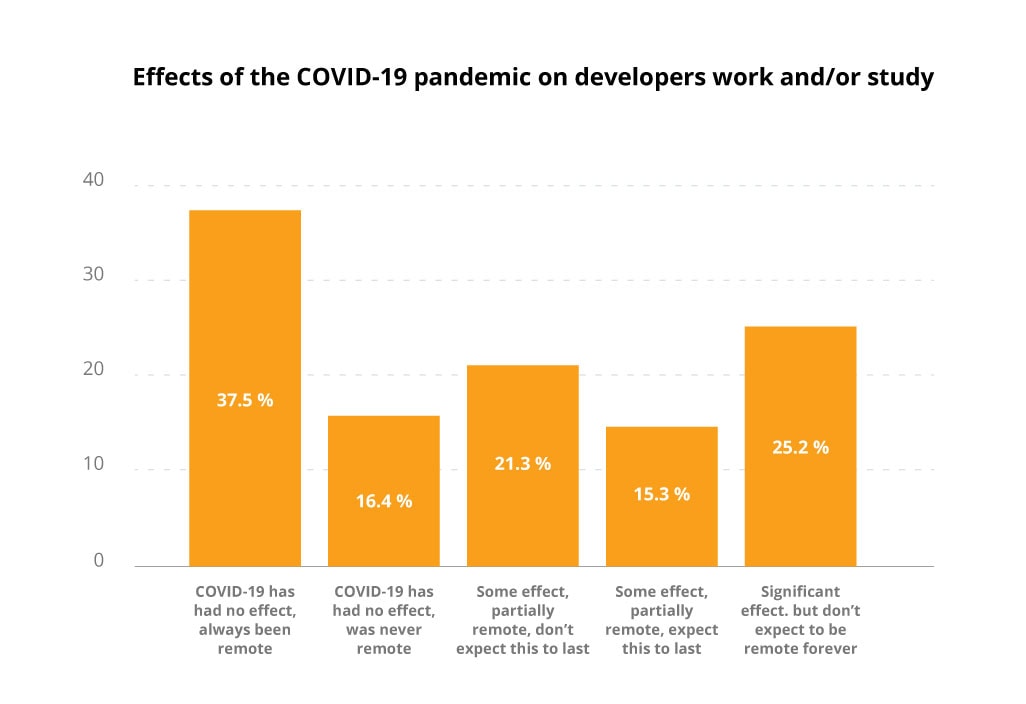 What does the developer population growth mean for developers in Europe?

Will a significant increase in the number of developers in Asia and Latin America affect developers in countries like Poland? The likely answer is ‘no’. Developers in Poland have clients from all over Europe. These connections are only expected to become stronger in the future, and the reasons behind this are: 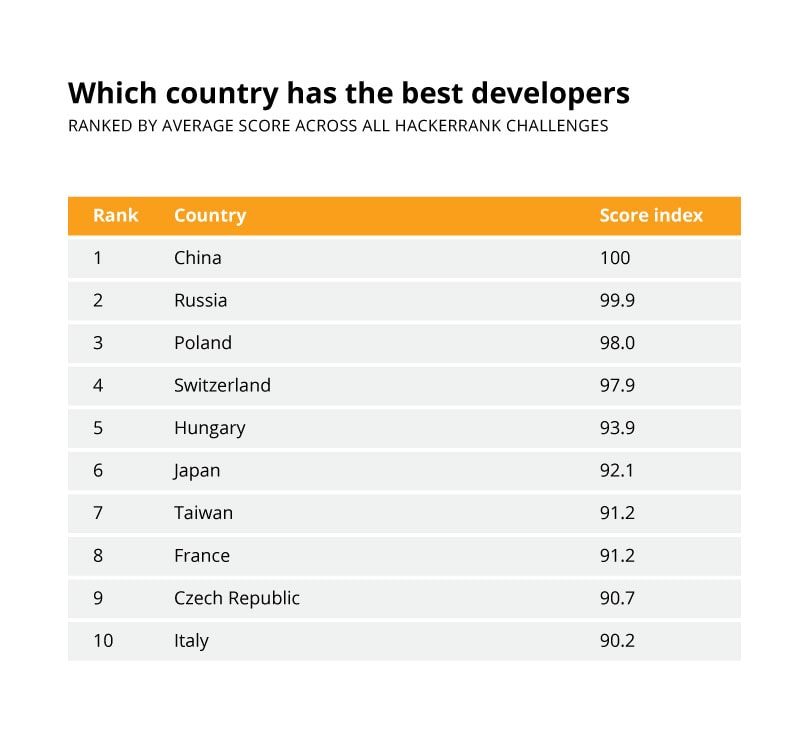 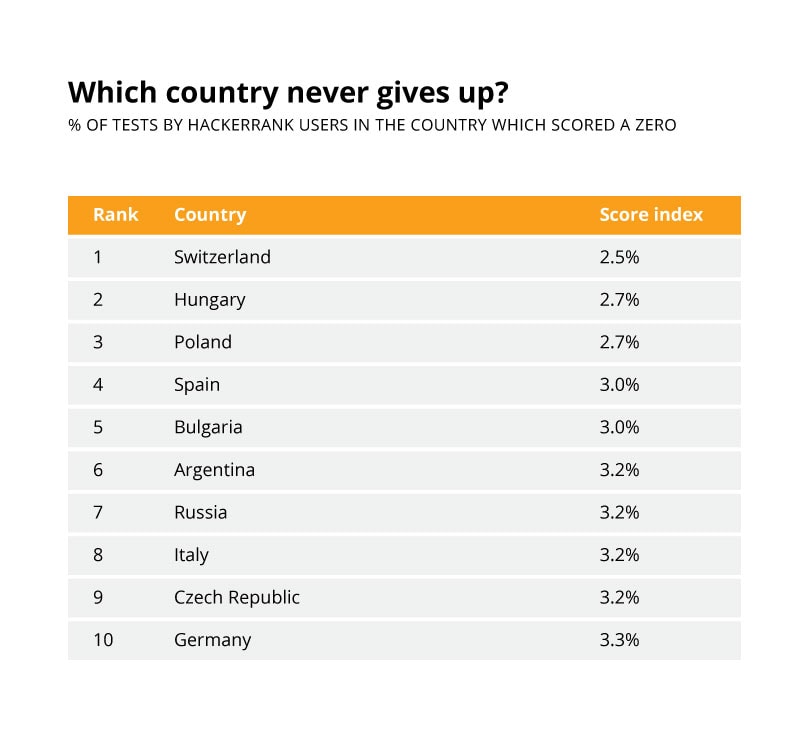 As long as developers in countries like Poland continue to put out quality products, organisations will have little to no incentive to outsource projects to developers in other countries, even if it may cost a little less.

Besides, developers from India and China have huge domestic populations of their own to serve, where they do not face potential challenges such as miscommunication due to language barriers and differences in time zones, etc.

You can create a Request for Proposal for your project and compare proposals among European and Asian IT companies.

Also, check to see how most developers like to spend their free time, so that you can create a pleasant and friendly work environment for the ones that you have already hired.

What do you do to take a break from coding?

Remember: a good developer is worth their weight in gold, so you need to do everything you can to keep your turnover rate as low as possible.

Over the last three decades, the computer software industry has been experiencing high growth rates.

Subsequently, this sector has become one of the most internationally dispersed in the world. As a result, the industry continues to provide unique and unparalleled opportunities that support the broader development and growth of many developing countries.

With the mutually increasing supply and demand of developers worldwide, the software domain is sure to continue growing into a very dynamic global industry. This gives us hope that we will also see a corresponding increase in the percentage of female developers around the world. From the perspective of software development, the future looks very promising. 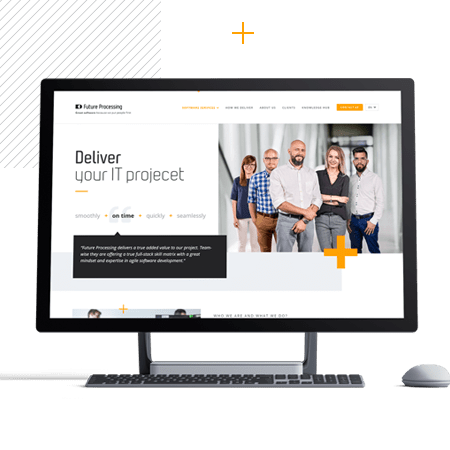 Looking for software developers for your project?

Explore our potential and reach your goals.