By combining local ecological, environmental, individual, and social information, data and wisdom through geo-design and systems thinking, we can start to build a powerful future meta-narrative, that of the nature smart society, which is based on nature wisdom and the quest for human-nature wellbeing.

Nature is our mother. Because we live cut off from her, we become sick.
Thich Nhat Hahn

Towards a Humane Society

Fifty years ago, Professor Helmer Stenros – an architect and my father – said this in his inaugural speech:

To be honest, we have to admit that we have not succeeded in creating, designing and building an environment – barring a few exceptions – where people enjoy themselves and feel free and happy.
Helmer Stenros

And he continued by saying that architects did not master – neither in theory nor in practice – the skills that would lead to a humane society. His point was that we knew too little about human beings to find a solution to the root cause of problems.

Today, 50 years later, we are still in the same spot: we simply do not know enough about humans or nature to solve the complex problems of our time. The climate crisis and the pandemic crisis have clearly shown our lack of understanding of the human-nature connection, and the current wellbeing crisis of the humans themselves. In our accelerated technology hype, we have lost our inherent connection to other human beings and to nature.

Architect Cedric Price raised a critical voice already in 1966, stating that: “Technology is the answer, but what was the question?“

Today, we need to reframe the question of human society, cities and nature to understand their interdependencies in order to create a more humane and sustainable both man-made and natural environment in the future. 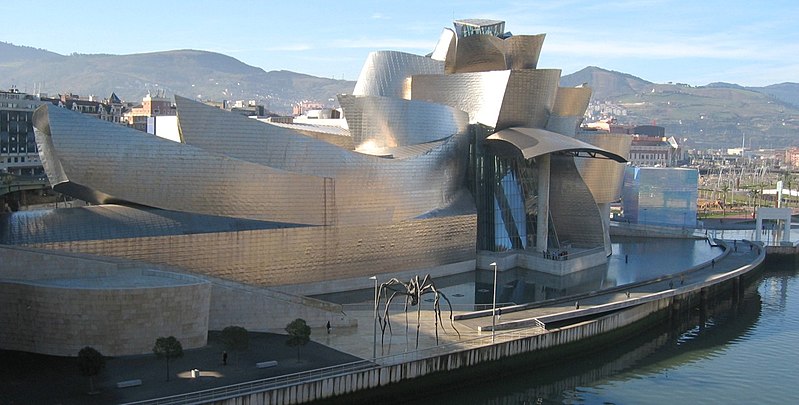 The architect Frank Gehry said in a recent interview that “I’m up for anything that helps build a city into a better environment” and “The more humane a building, the better”. Gehry says that it is the “humanity” of his buildings that sets them apart and resonates with people.
And, indeed, the unquestionable artistic dimension of Gehry’s work speaks for humanity, representing narratives in a built form. “I think Bilbao (1993-97) was the first time I got to do a curve shape that’s from the fish fascination,” he says, adding that the key was translating the movement of the fish into a building. This simple metaphor tells a lot about the power and the complexity of the narratives in built form.

The Power of Narratives

Narratives have always been in the heart of any culture. They create the collective content of the society we carry on through times. Professor Emerita Helga Nowotny defines a narrative in her latest book In AI We Trust (2021) as a form of storytelling by saying that they are about real or fictitious events, persons or processes, and about what happens to them. She continues by saying that they are a potent tool of communication, enabling cooperation through what unites us, or turning us against each other. In addition, digital technologies have enabled them to circulate faster and wider, but also made it easier to fake them. Yuval Harari has argued that we are a species of storytelling animals and that we think in stories rather than in numbers or graphs.

So far, the most powerful meta-narrative that overshadows all others has been the narrative of progress and the quest for public happiness, according to Nowotny. Future needs wisdom and humanity needs wisdom, says Nowotny, arguing that wisdom is needed to respond to what is not yet foreseeable – and what happens on the level where complex systems operate. This kind of wisdom is not about ‘solutions’. Instead, it is a quick fix, be it technological or of any other kind. Says Nowotny: “Awareness about the problems and issues where wisdom is needed is growing.”

Narratives represent collective wisdom in a nutshell, they encapsulate complex information into a compact and memorable form. The climate change is one collective narrative and thread that should be written into a legend. While our education is largely based on facts and figures rather than legends and narratives, we have lost our inherent way of understanding complex social, cultural, and situational entities, namely the system of ecosystems. We have lost the soft power of our knowledge, the wisdom of creativity, naturalistic intelligence, and collective storytelling. What kind of narrative could be powerful enough to save the planet and us in the future? 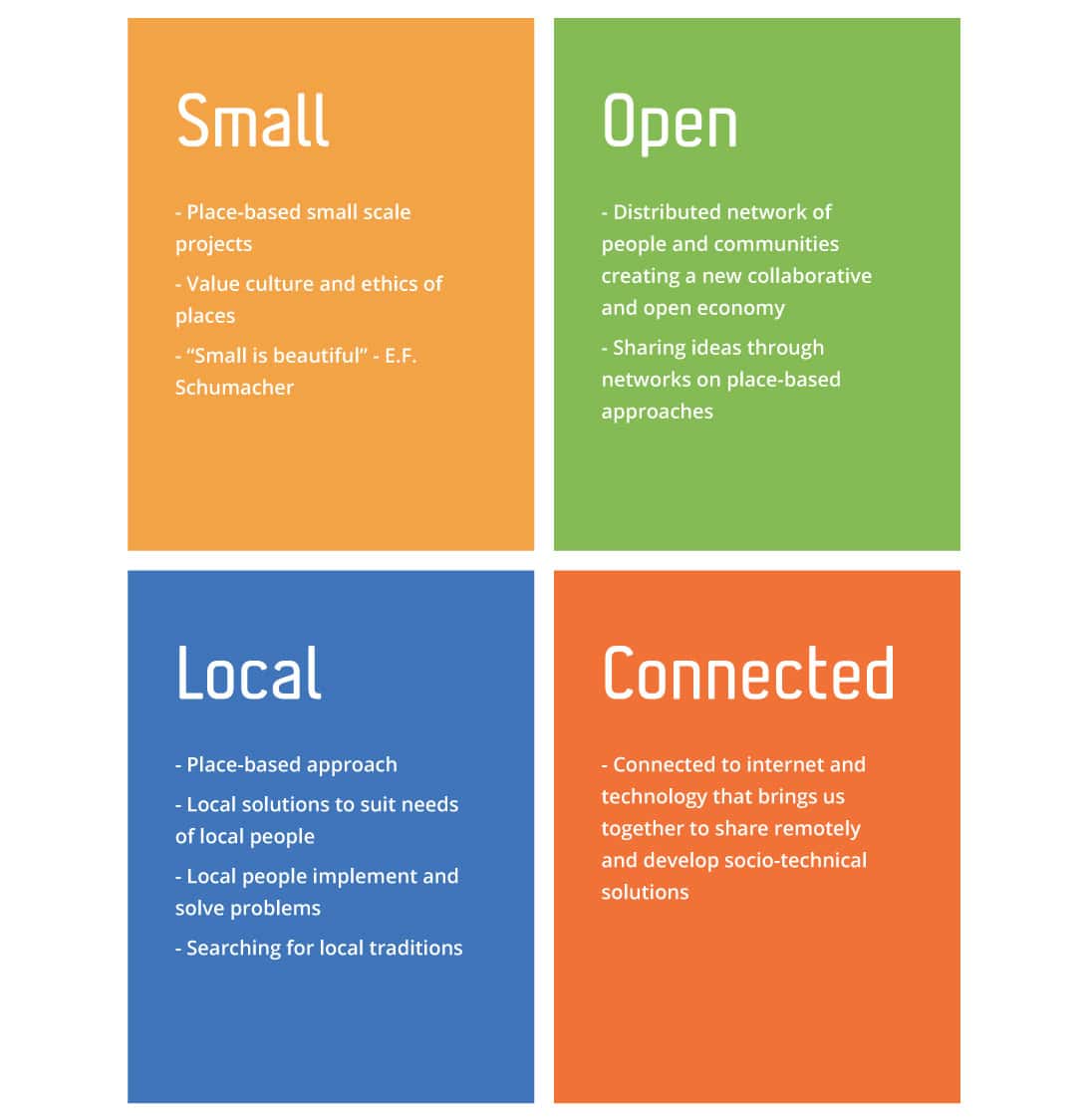 From Global to Micro-Local

Almost fifteen years ago, Ezio Manzini proposed his famous SLOC model of proximity and social innovation of the future by stating that by being small, local, open, and connected, every place could survive and support happy living. A lot has changed since, but the original idea of small units within bigger ecosystems sharing their ideas together for the betterment of human life is still valid and worth having a closer look.

The original SLOC model “could become a powerful social attractor, capable of triggering, catalyzing, and orienting a variety of social actors, innovative processes and design activities”.

Now that globalization has revealed its ugly face in plain view, we are moving back to more local solutions and networks, trying to keep them also open for co-development. We are currently entering the age of post-globalization and moving towards micro-localism.

Design Thinking has been the grand design narrative in the past twenty years. During that time, it has shown its power in both the business and social context. However, criticism is growing against its simplified model and wide use lacking any professional framework. The recent awareness of the merging of digital space and physical space, especially in cities, has created a need for a new type of design approach in the scale of city planning. The latest addition to the designer’s toolbox is Geo-Design.

Geo-design is environmental design usually involving large areas, complex issues, and multi-person teams, that leverages the powers of digital computing, algorithmic processes, and communications technologies to foster collaborative, information-based design projects, and that depends upon timely feedback about impacts and implications of proposed designs, based on dynamic modeling and simulation, and informed by systems thinking.

He continues that geo-design projects will aim at increased environmental quality, sustainability, minimum impact, and concern for ecological structure and function with an eye for human communities and concerns.

Adding local data to design processes makes geo-design a powerful tool for future urban design and placemaking. With geo-design it is possible to simulate different design alternatives in a local situation in their full capacity and complexity. 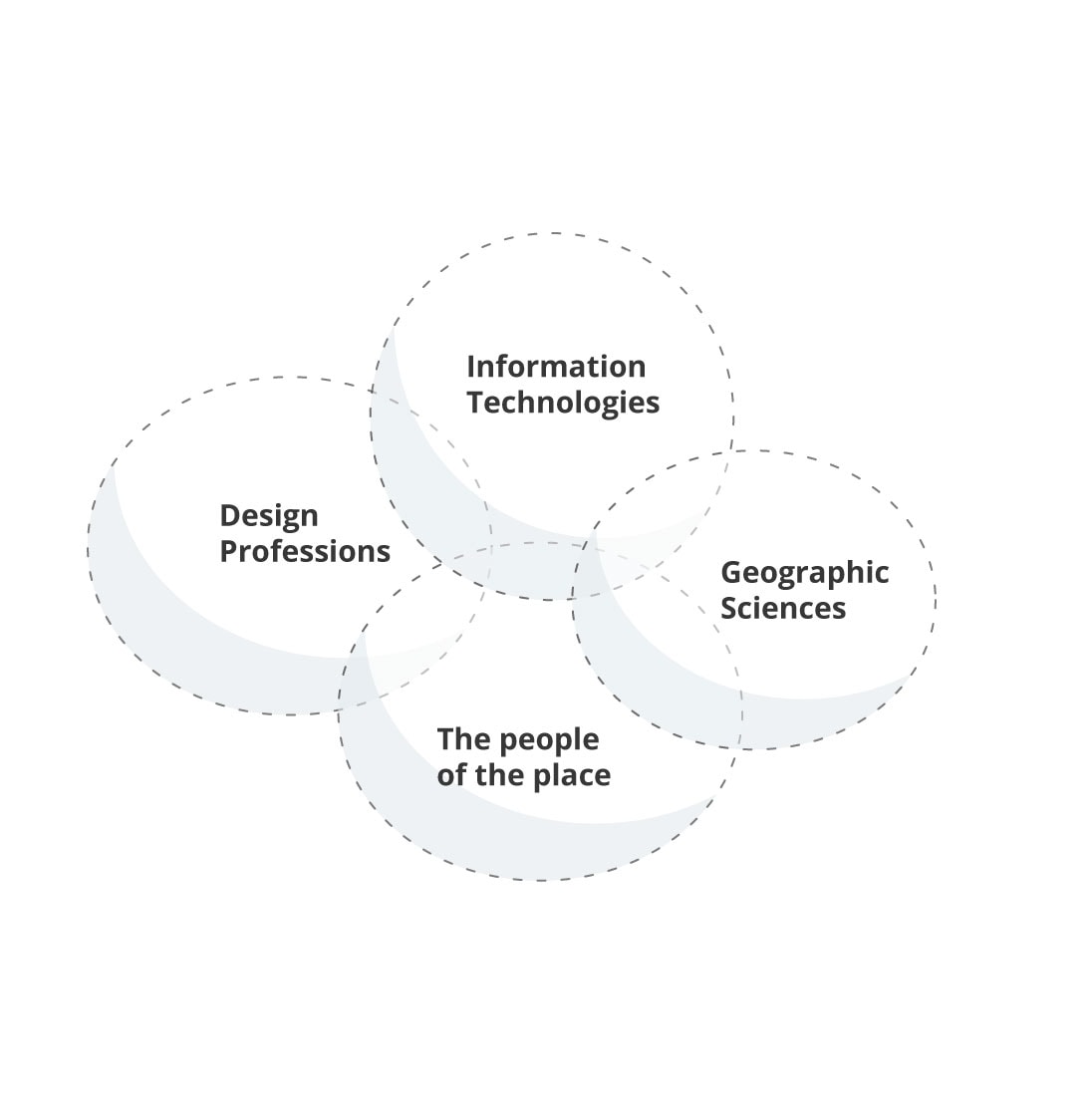 Setting a New Framework of Design

An example of how design and data can be locally used in a complex context is the collaboration of BMW Design Works with the City of Rotterdam. They have joined forces to work on creating solutions that make cities more livable. Rotterdam is to become a blueprint for urbanity worldwide. This example also shows how a car manufacturer can be involved in designing a wider context and not just vehicles. The detailed visualizations – or visual city narratives – are captivating, with numerous highlights and examples of future mobility throughout the city. Based on their concept, the city of the future is efficient, green and digital. It is all about “multimodality”, choosing the most efficient means of transportation.

the design of ‘eco-city’, or transportation-oriented development, in the 21st century, would all be ‘geodesign’, as they would surely leverage GIS, CAD, remote-sensing, and other digital data and computational tools and teams of specialists.

In many ways, the future narrative of the City of Rotterdam by BMW Design Works also presents a revised version of Ezio Manzini’s SLOC model, with a strong emphasis on the micro-community level of the city.

Perhaps the future of city planning processes is based on the SLOC model supported by the geo-design framework using local data. It also harnesses the knowledge of local citizens through the data collected by themselves from their surroundings. By doing so, in the end, we are all involved in making together the future narrative of more sustainable cities and the wellbeing of its citizens. 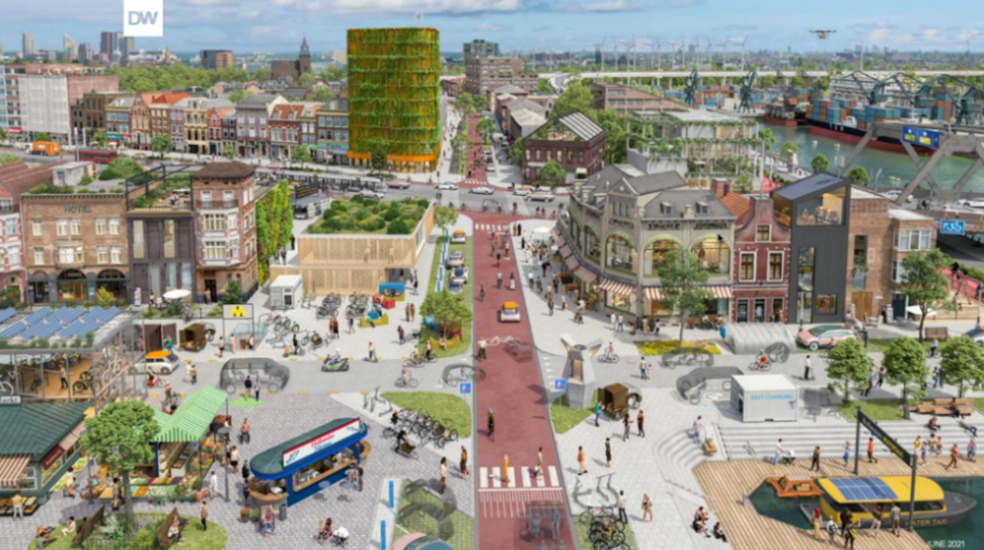 Reframing the Next Meta-Narrative

Some time ago, I proposed a new urban narrative, the Nature Smart City, based on the theory of multiple intelligences by Howard Gardner. Nature Smart is one of the seven human intelligences, and it is an essential element of our nature connection. By applying nature wisdom, we can create more sustainable, livable, and lovable cities. However, single cities are not enough when reframing the future planetary problems; instead, we need an all-encompassing perspective, a new meta-narrative for a more sustainable future, doing and living well.

By combining local ecological, environmental, individual, and social information, data and wisdom through geo-design and systems thinking, we can start to build a powerful future meta-narrative, that of the nature smart society, which is based on nature wisdom and the quest for human-nature wellbeing. It confronts the prevailing meta-narrative of techno progress and replaces it with a narrative of harmony, health, humanity, and hope.

At the end, we return to the motto: future needs wisdom.
Helga Nowotny

Dr. Anne Stenros is a thought leader and an architect with a doctorate in technology. She has over 25 years’ experience in creative leadership and strategic design. Between 2005-2015, she acted as the first Design Director at KONE Corporation, a world leading elevator and escalator company. In 2016- 2018, she was appointed as the first ever chief design officer CDO of a city, namely the city of Helsinki. She has also had a professorship in Creative Leadership at the Aalto University. She has participated as an expert role in many different EU forums, and she was the Member of the World Design Capital WDC 2022 Selection Committee by World Design Organization WDO. Currently she is speaking, lecturing, writing, mentoring and catalysing change. She is curious about the future of cities, architecture, and urbanism. She believes in collaboration, co-creation, and creative collective.

Stenros, A. (2022). THE NATURE SMART CITY II – Defining the Next Urban Vision. International Journal of Proceedings of Science and Technology. (tbc). IEREK Press. 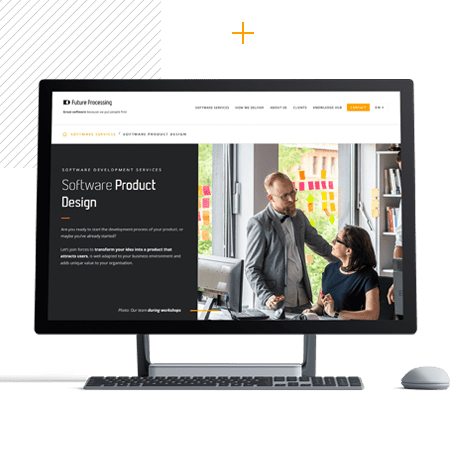 Transform your idea into a product with designers and engineers.

Take the 7-question survey and get recommendations to ensure your software is adapted to your business and the users.

Roadmap for Product Development — what do you need to know?

A digital product consultant - your guide to successful digital transformation

10 benefits of a digital acceleration strategy for your business